We are constantly navigating paradoxes, contradictions and differences in our lives and relationships.This web of energies pulling in different directions may be viewed as creative polarities instead of destructive differences. Conflict and cooperation are themselves often two sides of the coin - or polarities of oscillating energy and information.

Polarities are an engine of civilization. This is well captured in the Taoist “yin-yang” symbol which represents interdependent energies – like light and dark – and the acknowledgement that life is about both.

Yin/Yang is the principle of natural and complementary forces and patterns that depend on one another and are incomplete on their own. These may be masculine and feminine, or darkness and light, wet and dry or action and inaction.

These  opposites like conflict and cooperation can be complementary and fit together harmoniously. This can be seen very clearly in the Ying/Yang symbol illustrated below. The dark area contains a spot of light, and vice versa, and the two opposites are intertwined and bound together within the unifying circle. Yin and yang are not static, they balance ebbs and flows between them - as illustrated in the flowing curve where they meet:

“Each day of human life contains joy and anger, pain and pleasure, darkness and light, growth and decay. Each momento etched with natures grand design. Do not try to deny or oppose the cosmic order of things.” - Morehei Ueshiba - O Sensei 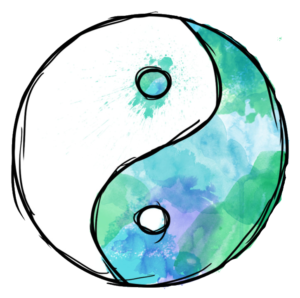 As the Yin/Yang polarity gives us a modern language for looking at these opposing and complementary forces.  It illustrates how they can work as interdependent pairs that are interdependent . Since polarities are unavoidable, they are present in every individual, team, organization and nation. Many polarity pairs are immediately recognizable, such as home-work, activity-rest, intuition-facts, optimism-reality, caution-courage, self-other and structure-flexibility. Every team or organization is faced with managing the energy in polarities such as stability-change, global-local, mission-margin, team competency-individual competency, and part-whole.

Because polarities are interdependent, they need each other and neither is sufficient alone. Each side is accurate but incomplete without the other. Polarity thinking is about “both-and” and invites a move away from “you are wrong and I am right” thinking to “we are both right.” This kind of thinking supplements our traditional problem solving (either-or) thinking and acting.

Sometimes polarities are called conflicts. Or wicked problems, paradoxes, tensions, dilemmas, etc and are categorized by the fact that they cannot be solved like a conventional “problem.” That is, by working out which of the two options is preferable and then going for it. If you did so, you’d find that they’d rear their opposite. Instead of swinging like a pendulum from one end to the other, once an issue is identified as a polarity it can be leveraged for learning. The two opposing values can complement each other when they are managed in a balanced way. That is challenging, but when done well, it makes all the difference.

The poles are often mistakenly considered as irreconcilable “sides” because they appear to be in competition over a limited or scarce same outcome. When we find ourselves in conflicts or witness conflict around us we can challenge ourselves to see a more complete picture of opposites that can lead to a new, third way.  It is not always easy or pleasant, but it can help us learn and grow tremendously.

Some examples of polarities in life include the competing truths of both:

With the concept of Polarity Thinking, founder of Polarity Partnerships, Barry Johnson offers a model for identifying and tapping into the natural tensions that are created as individuals and organizations attempt to engage in a conflict of ideas. He identifies these tensions as “polarities to leverage” with supplemental thinking – not replacement thinking – of “problems to solve.” 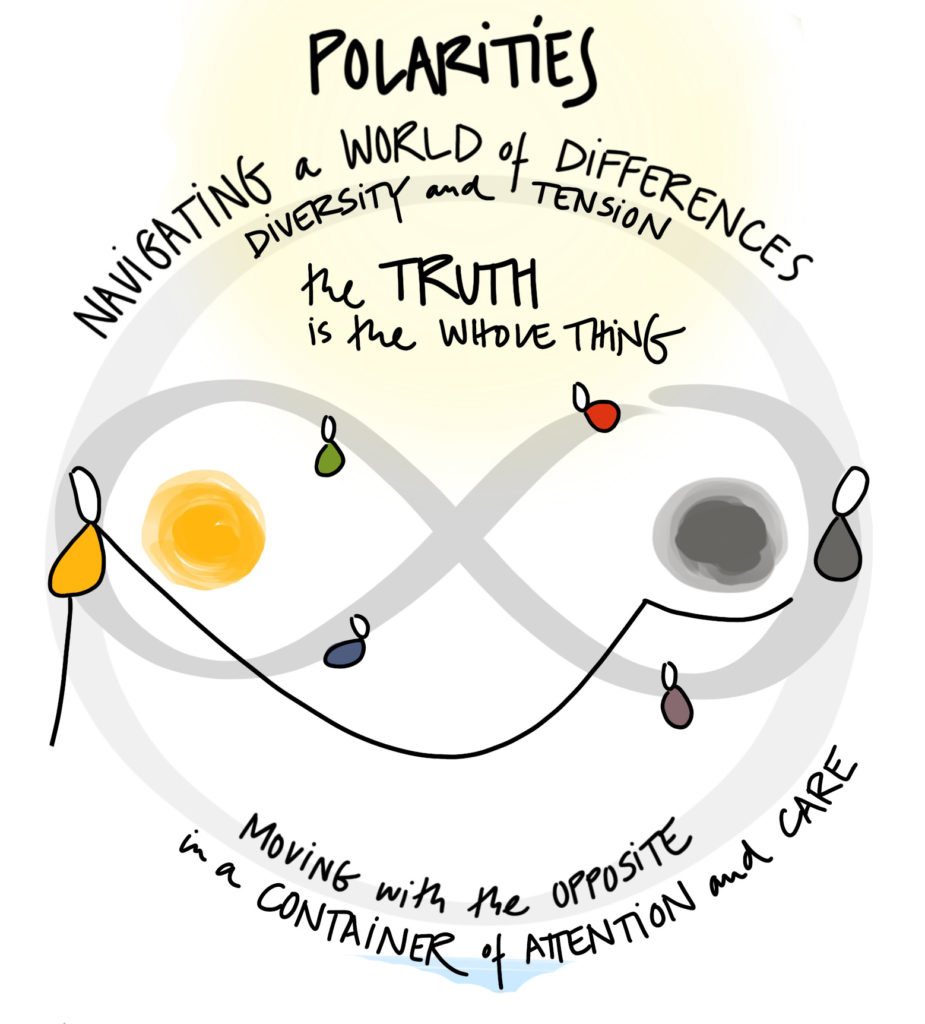 Barry Johnson, founder of Polarity Management Associates, now called Polarity Partnerships, took this concept and created the Polarity Map to help visualize both-and thinking. The map has four quadrants with each pole having an upside and a downside. Upsides are about the positive results obtained when we focus on that pole, and downsides are about the negative outcomes present there is an over-focus on this side without paying attention to the other side. With an understanding of polarity principles, one can predict what will happen if the focus is only on one side. In fact, the more attention paid to one side of a pole, the more certainty there is that there will be a move to the downside of the very thing that has taken all the attention. In addition, the more you are attached to “your side” or “your value,” the more you are unable to see the potential downsides attached to it. 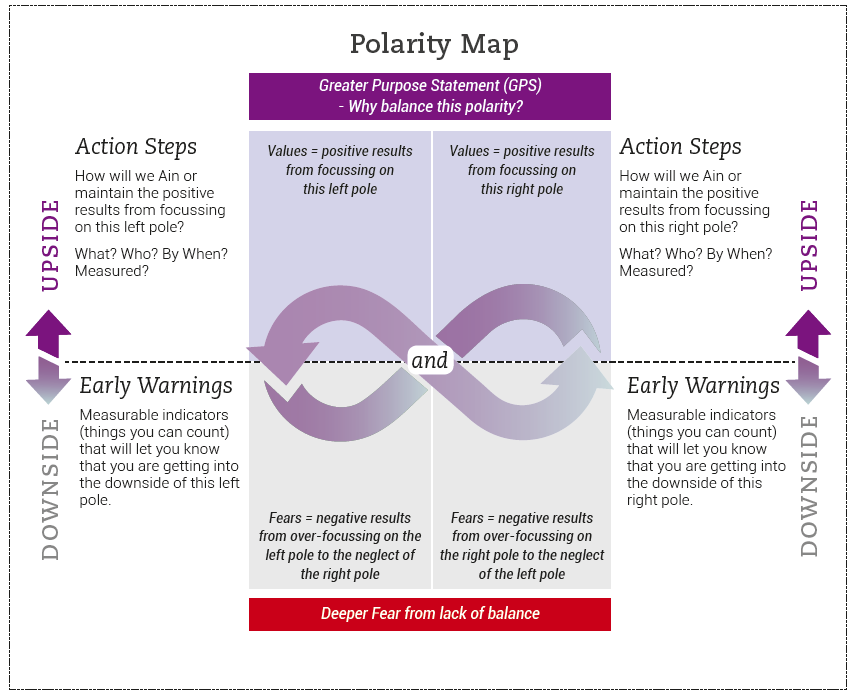 “Instead of contradicting each other’s view, the task is to supplement each other’s view in order to see the whole picture. Each of them has key pieces to the puzzle. Paradoxically, opposition becomes resource.” ― Barry Johnson